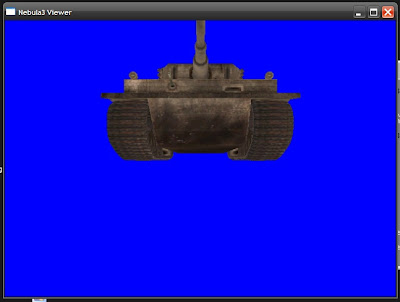 It's the Tiger tank from our toolkit examples, loaded through the legacy N2 resource loaders. Visually, it's nothing to write home about of course - it's rendered using the most simple textured shader possible. But nonetheless this is a very important milestone for Nebula3 because all essential building blocks of the Render Layer are now up and running, and a simple render loop is possible. A lot of things still need to be done of course: putting the renderer into its own thread, occlusion culling, realtime lights and shadows, lots of tests and benchmarks, and so on... but once the first triangle is on the screen, the rest is easy ;)
an 14:08 3 comments:

At first glance, CoreGraphics looks much more complex then Nebula2 because there are many more classes. The reason for this is simply that CoreGraphics classes are smaller and more specialized. The functionality of most classes can be described in one simple sentence, while Nebula2 had quite a few classes (like nGfxServer2) which were quite big because they tried to do several things.

A typical Nebula3 application won't have to deal very much with the CoreGraphics subsystem, but instead with higher-level subsystems like Graphics (which will be described in a later post).

Some of the more important design goals of CoreGraphics are:
A few other smaller improvement of CoreGraphics vs. gfx2 are:
That's pretty much all there is to know, next up are Resource, Models and Graphic subsystems...
an 19:22 No comments:

Here's the new July 2007 Nebula3 SDK release. I had to do some restructuring in the directory structure because of the Xbox360 specific stuff (which is not contained of course). Compiling is much faster now because I switched to precompiled headers. Please keep in mind that everything in the Render Layer is still under construction. The next few posts will mainly describe the various Render Layer subsystems.

What a delicious game! It's one of those rare cases where a great idea (evil Pikmins) actually turns into a great game. There are so many odds against such an "old-school" game-design-centric cross-genre game (most importantly finding a publisher which is willing to take the risk, usually your name has to be Miamoto or Wright if you show up at a publisher with a game concept like this...) that it seems like a little wonder to me that this little gem actually saw Gold. There must be 50 similar projects which didn't make it past the prototype stage. Go out and buy this game, something like this only happens once every 3 years or so :)

PS: I'm trying to get a new Nebula3 source release out the door ASAP. Still no 3d rendering though, there are some delays on the rendering code due to the Xbox360 work and I'm also very busy working on Drakensang at the moment.
an 13:40 3 comments: